House Hunting in the Virgin Islands: Hillside Splendor for Under $2 Million

After enduring back-to-back crises in recent years, the British Virgin Islands are beginning to see the return of tourists and foreign investors.

A Four-Bedroom Villa in the British Virgin Islands

This four-bedroom villa with Atlantic Ocean and Caribbean Sea views sits on a hillside on the northwest coast of Tortola, in the British Virgin Islands.

Built in the late 2000s from the shell of a Palladian-style home, the 6,000-square-foot Caribbean-style house, which is masonry and concrete with a standing seam metal roof, sits on a 0.81-acre lot of terraced gardens with winding paths, fruit trees and flowering shrubs. Three pavilions are connected by a patio tiled in coral stone with delicate fossil patterns surrounding a 24-foot swimming pool.

The house, which has stormproof windows, sustained minor damage in 2017 during Hurricane Irma, a storm that decimated parts of the British Virgin Islands, but it has been fully restored, said Anne Fields, who owns the home with her husband, Greg Fields. 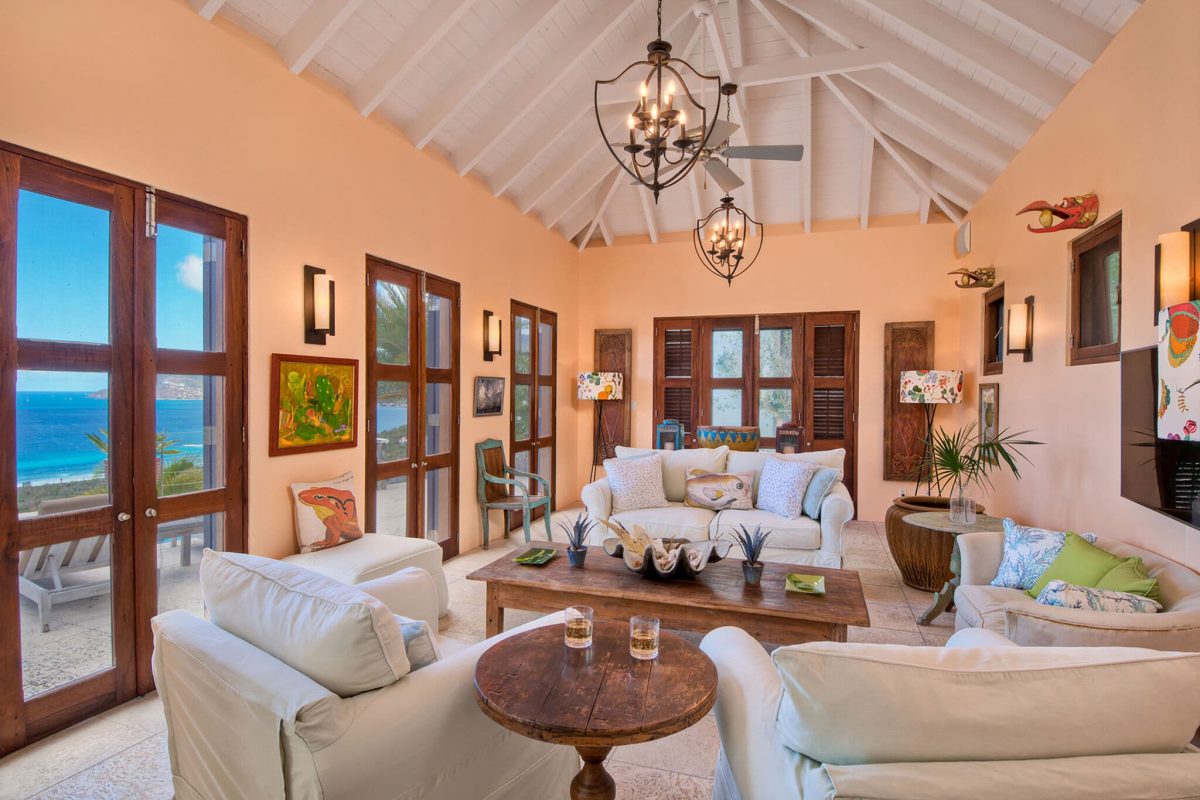 “We lost the parking pergola, and a couple of shutters and had some water damage,” Ms. Fields said. “A tree came through a glass dining room door, so we had to redo the floors. But we were very lucky.”

From the pergola, stone stairs wind up the terraced hillside past the two-bedroom guesthouse to arrive at the pool deck, which is the main level. The cream-colored house has window frames and blue-painted shutters. Three sets of French doors open to the living pavilion, which adjoins a wet bar and indoor grill with its own arched doors opening to the pool.

“The indoor barbecue is great, because if it’s raining or blowing, you can cook out and you’re not out,” Ms. Fields said.

A pass-through with a counter connects to a kitchen with Corian countertops, mahogany cabinets and travertine floor tiles. Adjacent to the kitchen is a formal dining room, which has mahogany floors and air-conditioning. Several sets of French doors open to a spacious veranda with a dining area. Beyond the dining room, a mahogany staircase ascends to the second-floor primary suite, which has wood floors, built-in louvered closets and a den.

From the main level, stairs descend to a bedroom suite with a secluded deck overlooking the water.

Across the pool deck, the two-story guesthouse has two bedroom suites, one with its own porch and the other with a private garden terrace.

The villa has a government permit to rent on a short-term basis, Ms. Fields said. Before Hurricane Irma, when it was frequently rented weekly, the annual income was around $100,000, she said. 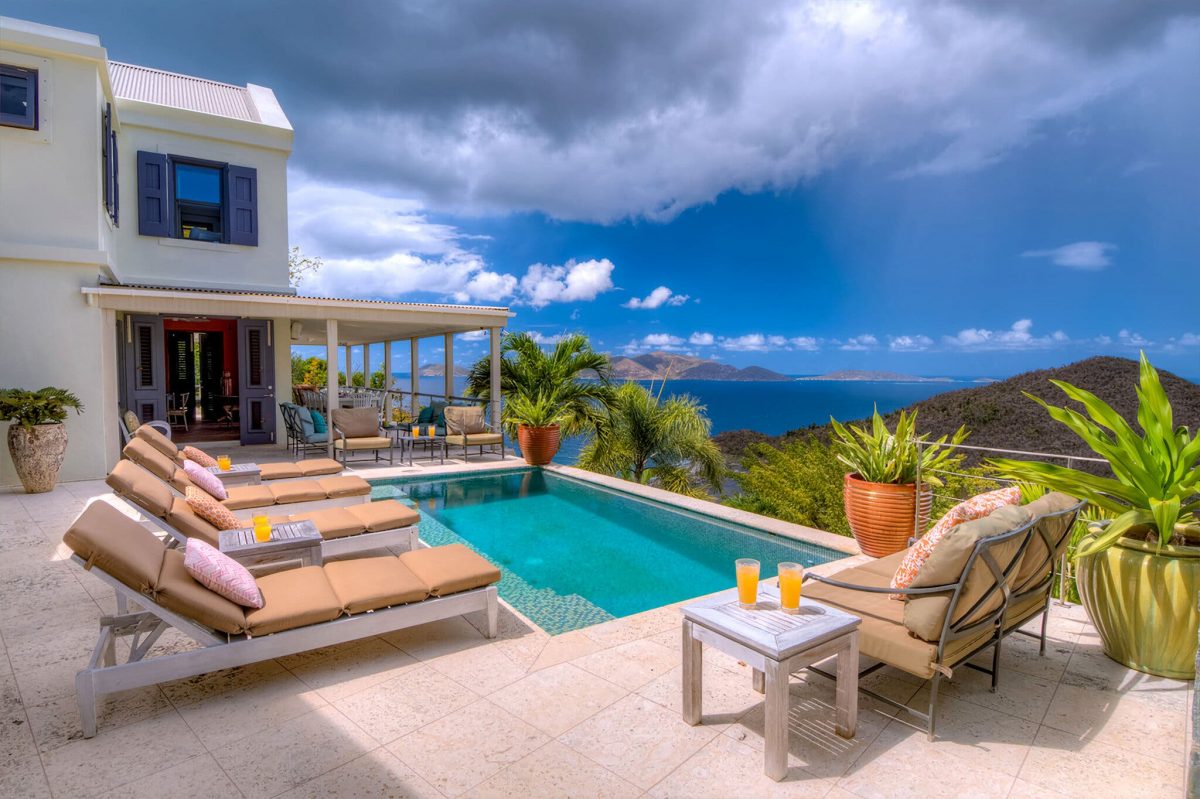 The house is part of the Belmont Estate, a planned residential community of tree-lined streets winding through hills popular with walkers and cyclists. It overlooks Belmont Pond, a freshwater lagoon frequented by many bird species, including an occasional flock of flamingoes, Ms. Fields said. There are also expansive views over Long Bay Beach and out to Jost Van Dyke.

Soper’s Hole, a short walk down the hill or a five-minute drive, has restaurants, shops, a grocery store and a marina, Ms. Fields said. Numerous beaches, including Smuggler’s Cove, with excellent snorkeling and Long Bay Beach for surfers, are also nearby. A ferry dock has service to Jost Van Dyke, as well as St. John and St. Thomas in the U.S. Virgin Islands. Terrance B. Lettsome International Airport is a 50-minute drive away.

The Virgin Islands, a British Overseas Territory comprising more than 50 islands in the northern Caribbean Sea, has endured back-to-back blows in recent years: Hurricane Irma in 2017 and then the onset of the coronavirus pandemic in 2020.

The housing market peaked in 2016 with the debut of several upscale resort developments on Virgin Gorda, one of the larger islands along with Tortola, Anegada and Jost Van Dyke. The following year, Hurricane Irma damaged about 80 percent of the housing stock, along with many tourism businesses, brokers said. It was boating enthusiasts that helped keep the tourism sector from collapsing.

“The private sector were very good at picking themselves up, and the yachting industry in particular did extremely well at getting boats to come back here,” said Edward Childs, a director at the brokerage Smiths Gore BVI.

After two years of reconstruction, during which many locals acquired and repaired damaged properties, tourists began to return to the islands, renting villas and staying at newly refurbished hotels in the winter high season of 2019-20. 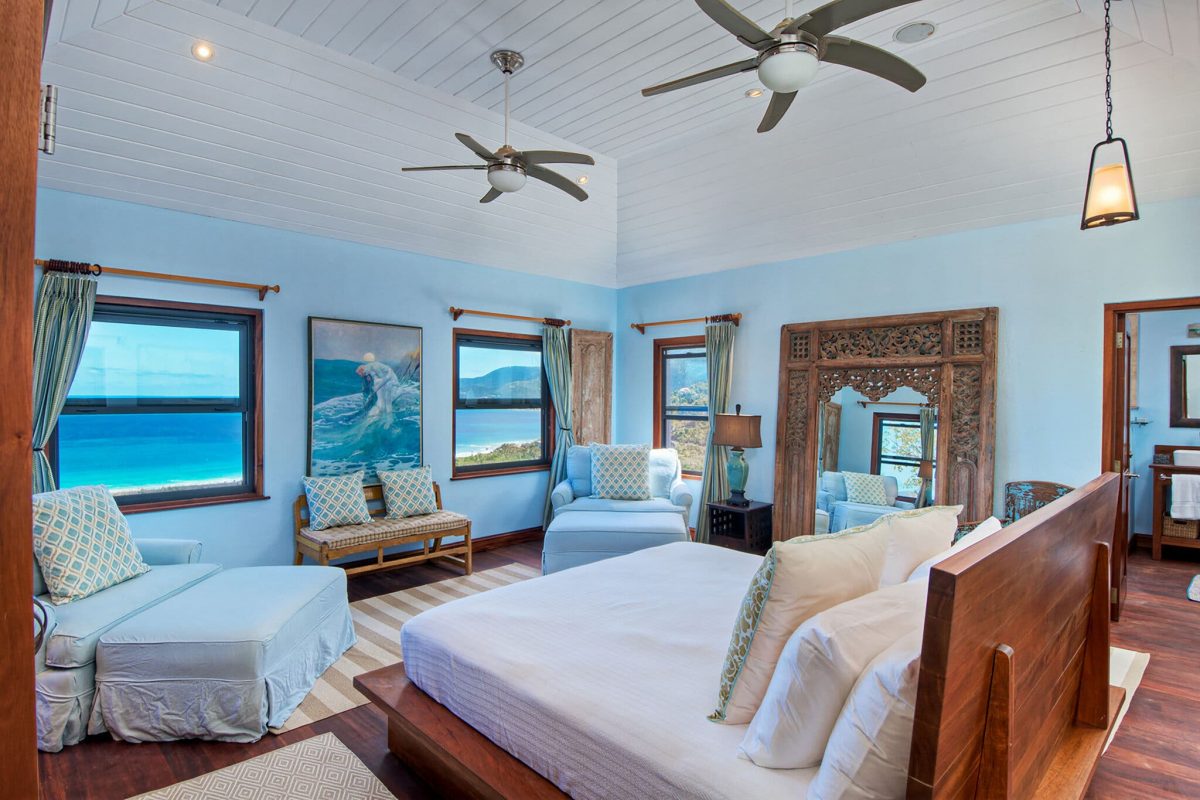 “By 2019, most of the hurricane-bashed homes were sold or had been rebuilt, though not all,” said Chris Smith, a managing broker with Coldwell Banker British Virgin Islands Real Estate, which has the listing for this home. “We were trying to get back to normal in 2019 when Covid hit.”

The pandemic brought a lockdown and curfews, as well as some of the more onerous travel restrictions in the Caribbean, said Edward de Mallet Morgan, a partner in global super prime residential at Knight Frank. “I think the main reason for the prohibitive restrictions is the islands are a big financial center, a big insurance center, so tourism isn’t as important as it is in some other Caribbean countries,” he said.

Once again, domestic buyers stepped in to sustain the housing market, buoyed by a stamp-duty exemption for local purchasers introduced in 2020 and extended into 2021. Foreign investors began returning to the Virgin Islands in 2021, as they have throughout much of the Caribbean, Mr. Childs said.

“For the last two years, we’ve been used to seeing hardly anybody around in the high season, but now we’ve got the cruise ships back, we’ve got people staying in hotels and villas, and we’ve got the yachts back,” he said. “You get the sense that for this high season, we’ve really got people back in the British Virgin Islands, and it’s about time.”

Data on housing trends in the Virgin Islands is not always current, because of landholding license processing times for foreigners, and the Department of Land Registry doesn’t issue reports, brokers said. However, according to Mr. Childs, from 2018 to the third quarter of 2021 there were 271 house sales, most on Tortola, where the seat of government and the financial sector are located, and on Virgin Gorda, a tourist island with spectacular beaches. 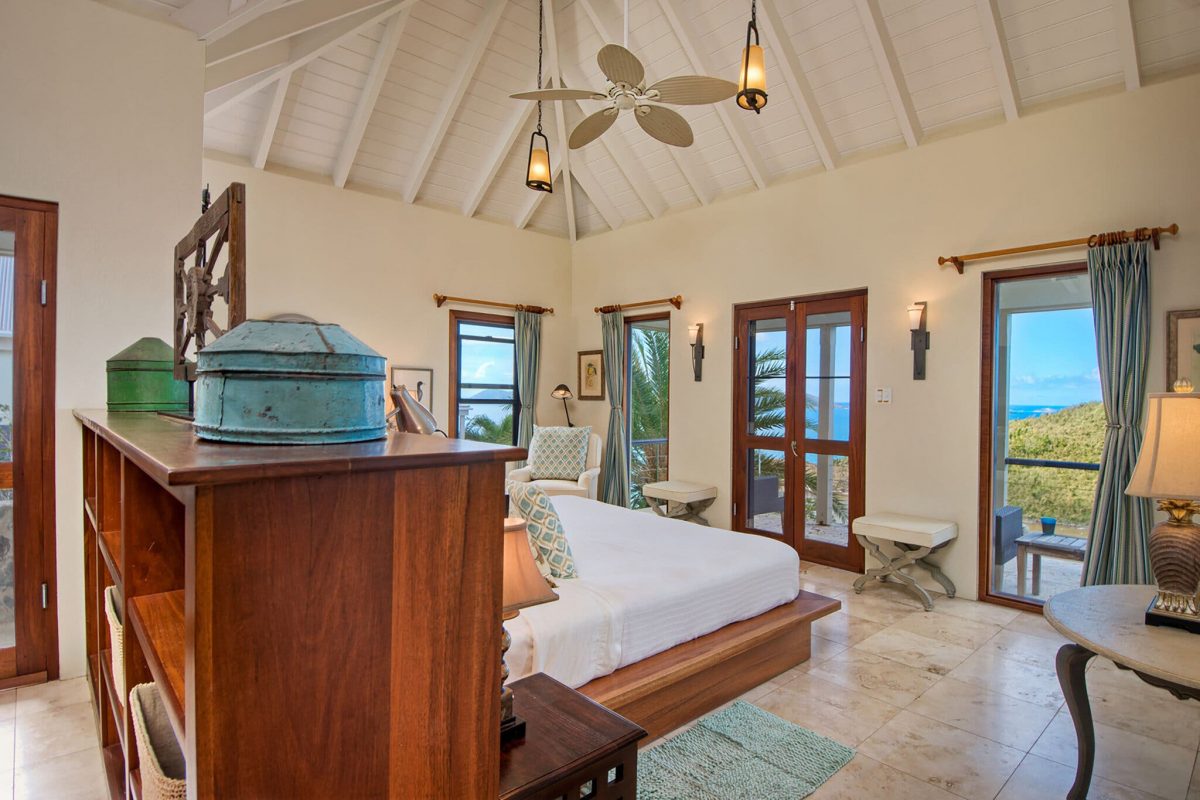 The two-story guesthouse has two bedroom suites, one with its own porch and the other with a private garden terrace.Credit…Coldwell Banker British Virgin Islands Real Estate

The British Virgin Islands have been slower to develop and are relatively affordable compared with other Caribbean islands, due in large part to the difficulty of getting to them. “One of the reasons people love the BVI is that it does feel quite wild,” Mr. de Mallet Morgan said. “That kind of slightly more barefoot, rugged, sort of sailing vibe is something that a lot of people like.”

Most foreign buyers are looking for homes in the range of $1 million to just over $2 million, Mr. Childs said. A three-bedroom home with a pool typically ranges from $1.75 million to $2.5 million on Tortola or Virgin Gorda, while a four-bedroom house with a pool can get up to $3 million, he said.

“I think the difference between the BVI and other markets is the boating factor,” he said. “We’ve got so many islands to go and visit, and it’s easy to get out in boats, and you’re in sheltered water a lot of the time. So a house that’s got a dock, and there’s not many available, that’s obviously going to attract a premium.”

Who Buys in the Virgin Islands

About 75 percent of the foreign home buyers in the British Virgin Islands come from the United States, Mr. Smith said.

Most of the other foreign buyers are British, with a smattering of buyers from other European nations, such as Italy and France, Mr. Childs said. “Once you get into the higher price brackets, we tend to see more of an equal spread between the American and European buyers,” he said.

There are some restrictions on foreign home buyers in the British Virgin Islands. For one, they have to apply to the government for a Non Belonger Land Holding License, brokers said. An appraisal, typically costing about 0.1 percent of the purchase price, must accompany that license application.

Buyers must also obtain a police certificate, bank statements and references, Mr. Smith said. “We always advise our buyers to hire a local lawyer,” he said. “It’s not cheap relative to what one might pay a lawyer in the United States, but very advisable.” 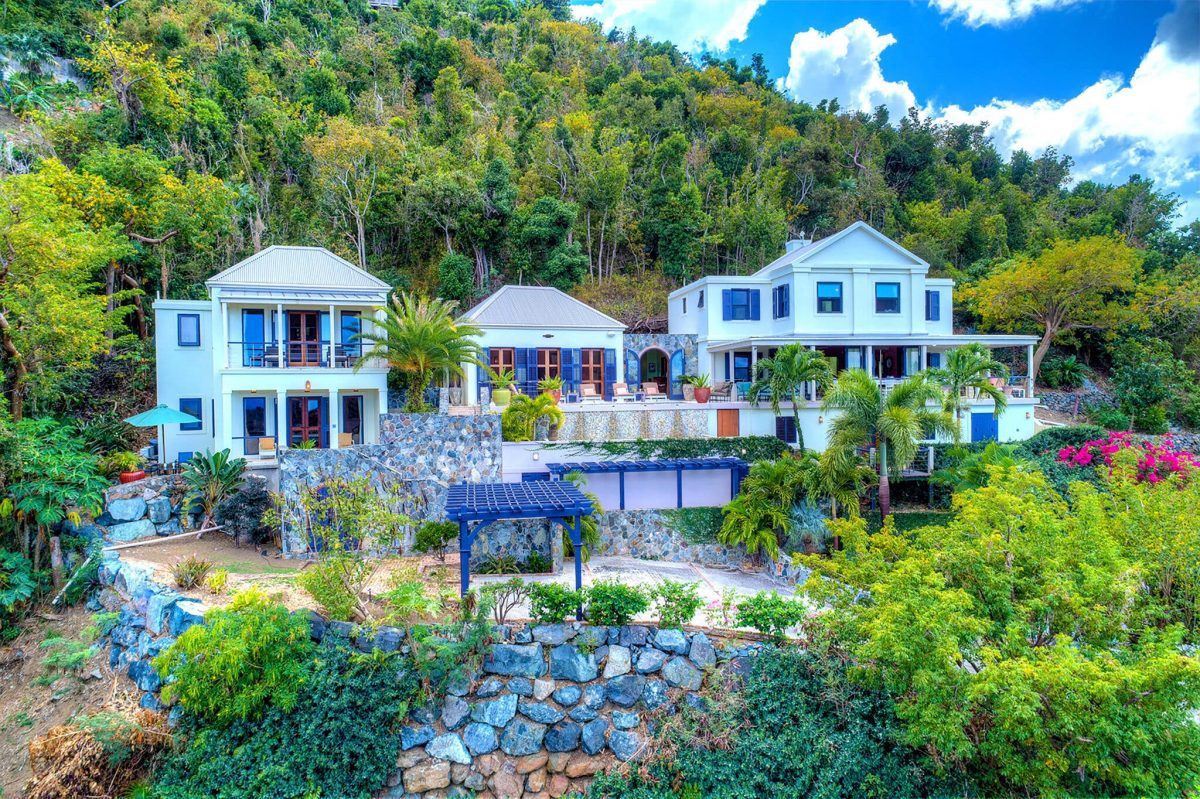 Including a stamp duty of 12 percent for foreign home buyers, total closing costs typically come to around 14 percent, he said. The broker commission, which is 5 to 6 percent on a home sale, is usually paid by the seller. Most retail banks will lend to foreign buyers, with financing available for roughly 70 percent of the home’s value at rates of about 5 percent, he said.

“But the processes are very cumbersome and not really designed to work alongside the Non Belongers Land Holding License process,” Mr. Smith said. “So most buyers pay in cash.”

Annual property taxes on this home are about $500, and there is a $1,200 homeowners association fee, Ms. Fields said.