In 1958, while sailing the crystalline waters of the Caribbean, Laurance Rockefeller happened upon a half-mile of pristine beach on the island of Virgin Gorda. He bought it, as Rockefellers tend to do. Seven years later, on January 18, 1964, he opened his own resort on the sprawling white sand crescent. It soon transformed into a tropical playground for the well to do: Queen Elizabeth and Prince Philip stayed there, as did their son, Prince Charles.

For decades, its luxurious reputation flourished, even as its owner changed (in 1993, it became part of the Rosewood Hotel group). It was just one of those Caribbean resorts whose buzz is a never-ending: Like GoldenEye in Jamaica, The Ocean Club in the Bahamas, Eden Roc in St. Barth’s, there is Little Dix Bay in Virgin Gorda.

But in 2017, Hurricane Irma swept through the island, its eye passing right over the resort. Little Dix was destroyed, and its surrounding community severely damaged. The beautiful bay was closed for business.

The hotel is staying true to its barefoot luxury roots (so yes, the cliffside spa is back). But those roots are stronger to reflect a new reality: Climate change has led to the intensification of storms. “They’re not going away,” says Pade. So the new building is outfitted with state-of-the-art hurricane-proof windows, protective shuttering, and other preventive construction measures.

The property has a newfound focus on sustainability: they forgo all single-use plastics, for example, and will do their own composting. And tucked away on the 500 acres is a sustainable farm, where they grow spinach, mango, papaya, watermelon and bananas, and gather organic eggs from their chicken coop. It’ll all be served at one of the resort’s four restaurants, along with seafood caught from the island’s fishermen.

Although their dining motto is the hyper-local farm-to-fork, there’s one thing they are sourcing from different corners of the globe: rum. Pade tells Voguethat Little Dix Bay has sourced 107 of the rarest liquors for their Rum Room, bringing in libations from South America, Southeast Asia, and everywhere in between. Their house drink will remain the same as it was in 1964: a Pelican Smash, a potent concoction made of four different types of rum, whisky, bourbon, pineapple, orange, and guava berry. “They obviously had a lot of fun in 1964,” jokes Pade.

In fact, 1964 was heavy on the Rosewood renovation moodboard. The interior designers behind the project, Meyer Davis, leaned into the glamour of the jet-set 60s, drawing inspiration from Jackie Kennedy’s travel style, vintage sea planes, Slim Aarons photography, and Fiat jollys. “The era in which the hotel was built was a vibrant time in the design world fostering eccentricity, forward thinking, playful energy,” the firm tells Vogue. “It was an opportunity for us to channel and celebrate that energy of the midcentury era in a contemporary way.”

So what does that look like? An emphasis on natural materials like wood and stone, all mixed in with nautical and vintage accents (one guest room, for example, includes a photograph of bathing cap-clad women on the beach, then there’s a “cabinet of curiosities” in the hotel’s great room). Everything blends into the landscape: stone terraces seamlessly flow into the sand, and stilted Tree House suites are embedded in the green flora—ensuring that, no matter where your room is, you feel one with your surroundings. Knowing naturalist Laurance Rockefeller, that’s exactly what he would have wanted.

Below, take an exclusive first look at Rosewood Little Dix Bay as it makes its return to the Caribbean. 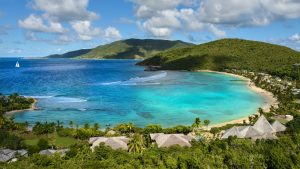 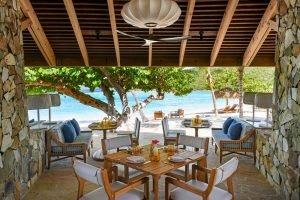 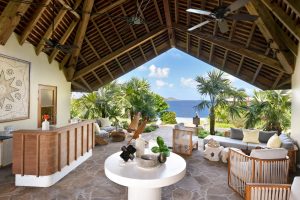 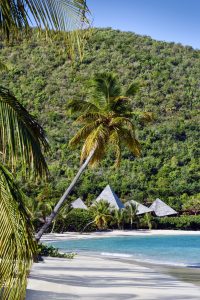 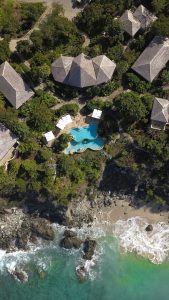